While more and more parents are aware of the impact of gaming and internet addiction on the health of their children, many can be oblivious to the fact that bad habits such as obsession over video games and attention deficit disorder (ADD) can be caused by a parent’s decision to utilize electronic devices as an educational or accompanying tool too early in their children’s life. Contemporary studies have shown severe consequences for allowing toddlers access to electronic devices, which include the overstimulation of the brain, thus leading to a lack of focus both during learning and socializing down the line. Due to this, the American Academy of Pediatrics (2016) has encouraged parents to forbid children under 18 months to watch television or use electronic devices (with the exception of video calls).

Recent research has indicated that the environment in which a toddler develops especially in the first three years of their life can significantly affect the development of their brains, which in turn can affect the rest of their lives (The Urban Child Institute, 2016; Ngala, 2016).

2. When a child is born, they are equipped with the most amount of brain cells (around 100 billion neurons) they will ever have in their lives. When a child is exposed to new experiences, through the five senses, brain neurons will rapidly form connections. With more and more new experiences to stimulate the brain, more and more connections between brain neurons will form, allowing the synapses (the area in which neurons connect to each other) to become stronger and healthier.

3. Although your brain can take around 25 years to fully mature, your brain is the most malleable during the first three years of life as a toddler’s brain contains two times the amount of synapses that adults have, which means it can be easily influenced by one’s environment.

4. Language is a perfect example of this. A two year old can develop language skills especially quickly, and the tones and enunciation absorbed from one’s environment in the early years can last through one’s life.

Despite the fact that children can absorb information swiftly, they can also fatigue easily, so make sure you don’t overstimulate them! 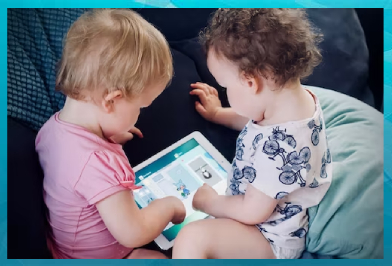 Doctor Dimitri Christakis is an expert in the field of child neuroscience and has produced more than 170 pieces of literature regarding early child development. In 2015, he and his team concluded that:

1. If a three year old watches more than an hour of television every day, he or she would be 10 percent more likely to have attention deficit issues; that possibility increases to 20% if the daily television consumption increases to two hours! Doctor Christakis explains that a toddler’s mind cannot fully differentiate between the real and fictional world of television – rapid flashing images and repeating sounds constantly attracts their attention. This causes toddlers to hold similar expectations in the real world, where they expect constant stimulation – this causes the interest and focus of toddlers to decline in the real world.

2. Doctor Christakis believes that the real issue is the speed and rhythm in which electronic screens play – the attention span of both adults and children will be impacted. The quicker the speed and rhythm of these moving images, the more dispersed our ability to focus on processing information will be. In an experiment carried out on older children regarding their cerebral cortex, the part of the brain which requires high levels of concentration, his team discovered that after watching over-stimulating and fast-paced videos, the children’s executive functioning became weakened as demonstrated through a memory sequence test. On the flip side, children’s performance in the memory sequence test did not change after participating in activities such as building blocks, reading and drawing.

3. Instead of allowing children screen time, Doctor Christakis encourages parents to engage and interact with them, which not only can strengthen parental bonds, but can accelerate a child’s linguistic development. In an experiment which involved 200 children from a low income area of Seattle, his team divided them randomly into two groups, with one group directed to play with building blocks with their parents every day for 30 minutes, and the other group as the control. After six months, the results showed that the group with the 30 minutes parent-child building block session daily had greater development in language skills, as well as being better than average academically. On the other hand, the children in the control group ranked below average academically.

Electronic devices should not replace the interaction between people, especially between child and parent. Human interaction is important for children as they can observe how others express themselves and distinguish between different emotions and sounds. Parents should seize the “golden period” of brain development in their child’s life to cultivate a healthy environment by encouraging them to read, play with toys, and interact with others – not only can this nurture great cognitive and social abilities, but it can establish a solid foundation for learning in the future.

Presence Quotient®, also known as Presence, is a Christian 501(c)(3) non-profit organization that has supported Christian and family values since 2003. We aim to raise up a new generation for the cultural mission — equip individuals and families to bridge the cultural and generational gaps and to live a unique life with wisdom.

Please click here to know more about this course.

In Asian-American families, the cultural differences between the younger and the older generations have led to differences in their core values; consequently, conflicts in communication arise. This course, “Healthy Dialogue”, helps parents and youth understand their responsibilities and roles, and provides two-way boundaries and communication guidelines between youth and parents as well.